Q: Why bother with encryption?  My laptop is safe--I'm over 6 foot tall and know some Karate.     A: A huge number of data breaches are caused by laptops left in cabs, bars, and hotel rooms.  Others are caused by careless handling of dead hardware, or backup disks.  Others are caused by intrigue or an armed assault. Q: But I password-protect Windows, and even my BIOS!     A: One screwdriver is enough to physically pull the drive, and then they can read the filesystem on any machine they like. Q: Why isn't it enough to encrypt just the important files?     A: Sensitive data can leak to temporary files, hidden, and deleted files.  Swap files, or filesystem slack space, are particularly bad.  Some editors, like Word, are bad about leaving parts of erased data inside existing files. Q: OK, I'm sold.  I just AES'd my disk.  Why's it so slow?     A: Most good encryption algorithms, especially Cipher Block Chain (CBC) style, are sequential--this means you could only decrypt the disk by starting at the beginning and working your way through.  For a normal disk, you want random access, so you need to be able to pick up the encryption at any disk block.   Q: OK, I now AES each disk block separately.  Wait, why are there all these repeating patterns?     A: You need a different initialization vector for each disk block.  Using the same IV basically devolves the cipher to electronic codebook for disk blocks, so the same 512-byte block always produces the same 512-byte ciphertext.  Using a predictable IV, like the disk block number, still allows a watermarking attack, where somebody carefully crafts a file with modifications to cancel out your changing IV, revealing a repeating pattern in the encrypted data.  A better scheme is to make the IV's depend on the key, like ESSIV (encrypted salt-sector initialization vector), although there are many options. The old (2.6) linux interface losetup is vulnerable to this sort of attack, even from my 5-minute C program.  Here's the encrypted filesystem when writing the watermark file to an losetup filesystem: 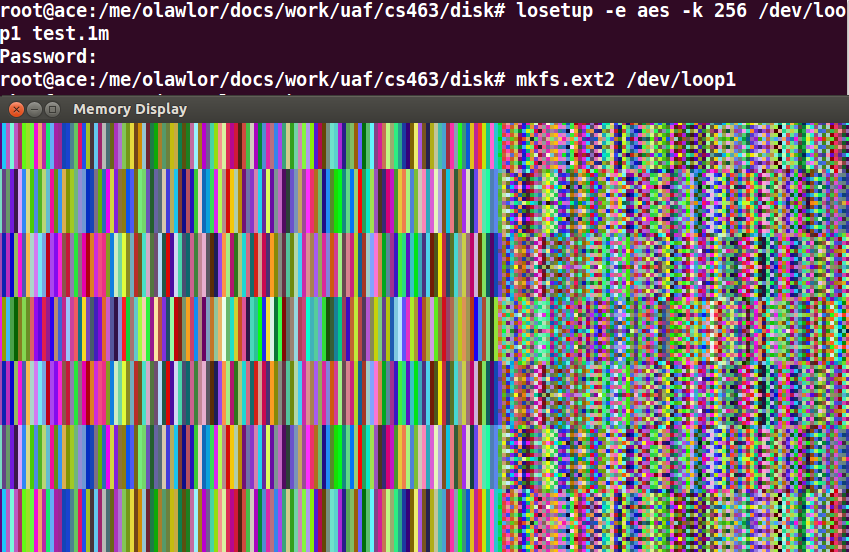 Here's the same file written to a newer cryptsetup filesystem: 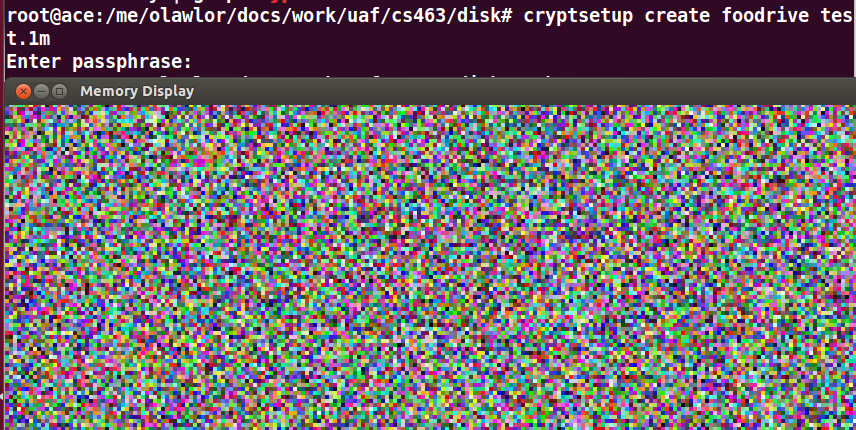 Note the repeating patterns (the watermark) is gone.  See the full command list below. Q: How do I set this stuff up? A: The bad news is you basically need to create an entire new filesystem to get encryption, on most machines there's no easy way to add encryption to an existing partition.  Definitely back up your data before encrypting it; I know several smart people that have lost all their files due to malfunctioning encryption.

TrueCrypt had an IP battle in 2014 and the maintainers stopped maintaining it, but there haven't been serious problems found in the drive encryption itself when audited (although there is a privilege escalation vulnerability using DLL hijacking).  The new and watermark-resistant Linux way is using dm-crypt; there is a fancy key manager called LUKS.
Here is the simplest non-LUKS approach (one key) using cryptsetup: In Linux, the old and less secure 2.6 way is using cryptoloop: Q: I need to let my husband use my computer, but I don't want to give him the same password.     A: It's probably more secure to have separate computers, but the standard trick for multi-user access to a single shared encrypted disk is to have one "disk key" that is stored in several copies, each one encrypted using a separate "user key".  The standard disk format on Linux for this is LUKS.  You can set this up so any authenticated user can read the disk, but nobody else can.  You could also have an unencrypted copy of the disk key in a vault or safe deposit box, for backup.

Q: Help, I forgot my disk key!     A: It sucks to be you.  If you don't have an emergency recovery information (ERI) file, or a key escrow somewhere, your data is now gone.  Hopefully you've got backups elsewhere!

Q: So if the filesystem is encrypted, even if they have physical access they can't read my files.  Cool.  They can't write my files either?
A: Not only can they erase your files, there are known "malleability attacks" where if they know enough about how your files are laid out, they can write to selected areas of the filesystem, potentially doing evil stuff like adding a remotely accessible backdoor.

Q: How do I break my adversary's full disk encryption?