Does this matter?  Well, does this look like OpenGL? 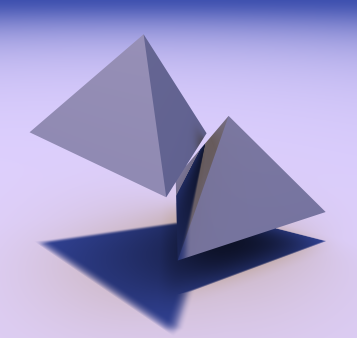 This is an image computed using "radiosity".

The terms we'll be using to talk about light power are:
See the Light Measurement Handbook for many more units and nice figures.

To do global illumination, we start with the radiance of each light source (in W/m2/sr).  For a given receiver patch, we compute the cosine-weighted solid angle of that light source, in steradians.  The incoming radiance times the solid angle gives the incoming irradiance (W/m2).  Most surfaces reflect some of the light that falls on them, so some fraction of the incoming irradiance leaves.  If the outgoing light is divided equally among all possible directions (i.e., the surface is a diffuse or Lambertian reflector), for a flat surface it's divided over a solid angle of pi (cosine weighted) steradians. This means the outgoing radiance for a flat diffuse surface is just M/pi (W/m2/sr), if the outgoing irradiance (or radiant exitance) is M (W/m2).

To do global illumination for diffuse surfaces, then, for each "patch" of geometry we:
For a general surface, the outgoing radiance in a particular direction is the integral, over all incoming directions, of the product of the incoming radiance and the surface's BRDF (Bidirectional Reflectance Distribution Function).  For diffuse surfaces, where the surface's radiance-to-radiance BRDF is just the cosine-weighted solid angle over pi, this is computed exactly as above.

So one important trick in doing this is being able to compute cosine-weighted solid angles of light sources.  Luckily, there are several funny tricks for this.

The oldest, best-known, and least accurate way to compute a solid angle is to assume the light source is small and/or far away.  If either of these are true, then the light source projects to a little dot on the hemisphere, and we just need to figure out how the area (and hence solid angle) of that dot scales with distance.  Well, the height of the dot scales like 1/z, and the width of the dot scales like 1/z, so together the area (width times height) scales like 1/z2.  That's the old, familiar inverse-square "law" you've heard since middle-school physics class and which, unfortunately, is actually a lie.

First, inverse-square falloff is only valid for isotropic light sources (same in all directions).  Non-isotropic sources (think a laser beam, or a flashlight, that shines only in one direction) don't generally fall off this way.

Second, say the light source is an isotropic 1-meter radius disk, sitting z meters away and directly facing you.  What's the falloff with z?  It turns out to be 1/(z2+1), not 1/z2. These are similar for large z, but at small z the disk isn't as bright as an equivalent point source.  That is, inverse-square breaks down when you get too close--and it's a good thing too, because you'd reach infinite brightness at z=0!


Luckily, there's a fairly simple, if bizarre, algorithm for computing the solid angle of a polygon transmitter from any receiver point.  This algorithm was presented by Hottel and Sarofin in 1967 (for heat transfer engineering, not computer graphics!), and again in a 1992 Graphics Gem by Filippo Tampieri.

You can actually just dump this whole thing directly into GLSL, and it will run.  Four years ago, the "acos" kicked it out into software rendering, which was 1000x slower.  Two years ago, on the *same* hardware, the *same* GLSL program ran in graphics hardware, and pretty dang fast too--a sincere thank you goes out to those unsung GLSL driver writers!

You can speed it up a bit (and mess it up too at close range!) by first noting that
is an angle-weighted, normalized cross product.

In theory we could compute the angle weighting just as well with
This isn't actually useful in practice, because it breaks down for nearby receivers--the angle between Ri and Rp exceeds 90 degrees, and asin starts giving the wrong answer, while acos keeps working all the way out to 180.

However, for distant receivers, which have small angles between Ri and Rp, we're close to having asin x == x.  Thus the above is very nearly equal to:
Now, the length of a vector times the direction of the vector gives the original vector, so we can actually just sum up the cross products:
In practice, this is very difficult to distinguish visually from the real equation, except very close to the light source, where this approximation comes out a bit darker than the real thing.

The above equation works great if the receiver can see the whole light source.  If something gets in the way of that light source, you still compute solid angle, but only where the light source actually shines on the receiver--a much more complicated computation to perform.

It is actually possible to clip away the occluded parts of the light source, and then compute the solid angle of the non-occluded pieces.  I've done this in software.  It's actually tolerably fast as long as you're willing to limit yourself to a few dozen polygons per scene.  But with any realistic number of polygons, computing the exact occluded solid angle becomes very painfully slow.  This is where approximations come in:


Unfortunately, the Achilles heel of all these techniques is scalability--they work fine for one or two occluders, but the raytracing process slows down as you add occluders.  A more promising approach for even moderately large models is to somehow use fragments to approximate solid angle and radiosity simultaniously, which we'll look at next class.