Counting on your fingers uses "digits" in the computational sense; digital storage uses discrete values, like the fingers which are either up or down.  A 25%-raised pinky finger does not represent one-quarter, it represents zero!  This means your fingers can bounce around a bit, and you can still tell which number you're on.  Lots of systems are digital:
The other major way to represent values is in analog.  Analog allows continuous variation, which initially sounds a lot better than the jumpy lumpy digital approach.  For example, you could represent the total weight of sand in a pile by raising your pinky by 10% per pound.  So 8.7 pounds of sand would just be an 87% raised pinky.  8.6548 pounds of sand would be an 86.548% raised pinky.   Lots of systems are also analog:
Note that in theory, one pinky can represent weight with any desired degree of precision, but in practice, there's no way to hold your pinky that steady, or to read off the pinky-height that accurately.  Sadly, it's not much easier to build a precise electronic circuit than it is to build a more-precise pinky.

In other words, the problem with analog systems is that they are precision-limited.  To store a more precise weight, your storage device must be made more precise.  Precision stinks.  The real world is messy, and that messiness screws up electrical circuits like it screws up everything else (ever hear of clogged pipes, fuel injectors, or arteries?).  Messiness includes noise and the gross term "nonlinearity", which  just means input-vs-output is not a straight line--so the system's output isn't the same as its input.

Yes, it's always possible to make your system more precise.  The only problem is cost.  For example, here's a review of some excellent, shielded, quality AC power cables for audio equipment.   These cables supposedly pick up less noise than ordinary 50-cent AC plug.  But the price tag starts at $2500--for a 3-foot length!

Note in many cases the desired output is indeed highly nonlinear--the output isn't simply proportional to the input.  If you're designing an analog audio amplification circuit, nonlinearity is considered "bad", because it means the output isn't a precise duplicate of the input, and the circuit has lost signal quality (think of the rattling base thumping down the street!).  But most computations are nonlinear, so an analog circuit to do those computations should also be nonlinear.  Such analog computers, without any digital logic, have actually been built!  In some sense, the best possible simulation of a mechanical system is the system itself, which can be considered a mechanical analog computer simulating... a mechanical analog computer.  The downside of such a "simulation" is noise, repeatability, and design and fabrication cost.

Luckily, digital systems can be made extraordinarily complex without encountering noise problems.  Digital systems scale better because to gain precision in a digital system, you don't have to make your digits better, you just add more digits.  This quantity-instead-of-quality approach seems to be the dominant way we build hardware today.  But be aware that analog computers might make a comeback in a power-limited world--considering that a single transistor can add, multiply, and divide, digital logic might not be able to compete!  Also, there are potential computability differences between digital and analog computers.


Digital Computation: How many levels?


OK.  So digital computation divides the analog world into discrete levels, which gives you noise immunity, which lets you build more capable hardware for less money.  The question still remains: how many of these discrete levels should we choose to use?
Two levels is the cheapest, crappiest system you can choose that will still get something done.  Hence, clearly, it will invariably be the most popular!

For a visual example of this, here's a little TTL inverter-via-NAND circuit: 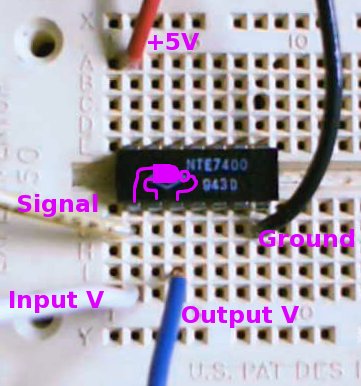 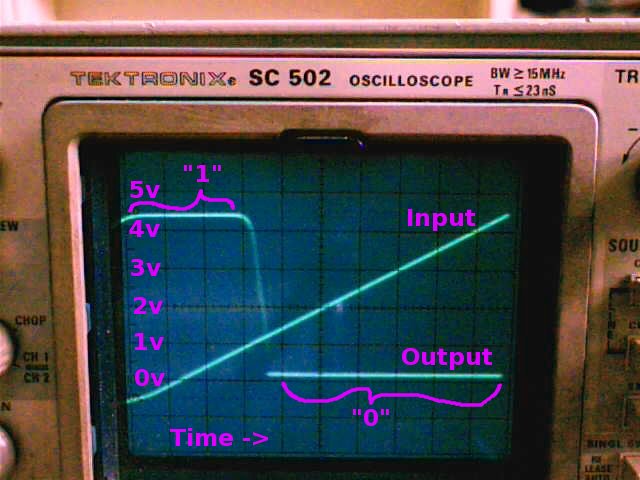 
Here's the trace of another chip of the same type.  Note the curve isn't exactly the same! 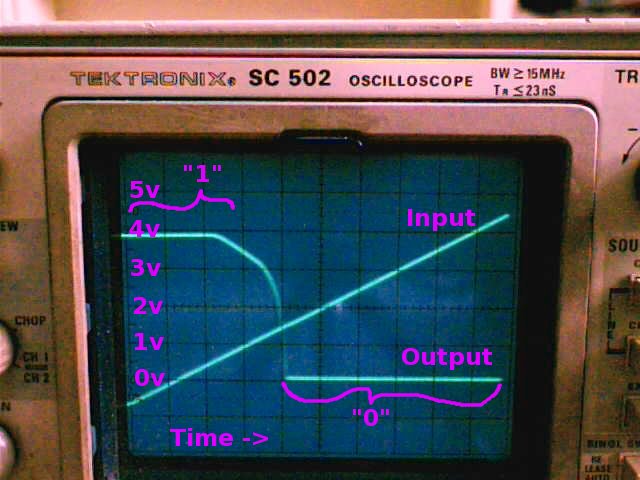 These two chips don't behave in exactly the same way, at least seen from the analog perspective of "how many volts is it sending out?".  But seen from the digital perspective, 0 or 1 output for 0 or 1 input, they're identical!

In general, digital circuits require more parts, but the parts don't have to be as precise.  As semiconductor fabrication technology has improved (so it's cheap to put millions of parts on one die), digital has taken over almost completely.


So here's some assembly language:
Here's the terminology we'll be using for the rest of the semester:
Here's a typical line of assembly code.  It's one CPU instruction, with a comment:
(executable NetRun link)

There are several parts to this line:
Unlike C/C++, assembly is line-oriented, so the following WILL NOT WORK:
Yup, line-oriented stuff is indeed annoying.  Be careful that your editor doesn't mistakenly add newlines!

A list of all possible x86 instructions can be found in: The really important opcodes are listed in my cheat sheet.  Most programs can be writen with mov, the arithmetic instructions (add/sub/mul), the function call instructions (call/ret), the stack instructions (push/pop), and the conditional jumps (cmp/jmp/jl/je/jg/...).   We'll learn about these over the next few weeks!

x86 is rather unique in that all the smaller registers from bygone eras are still right there as *part* of the new, longer registers.  So for example, this code returns 0x0000AB00, because 0xAB is put into the next-to-lowest byte of eax:
(executable NetRun link)

All of the above is for ordinary x86 machines (Intel Pentiums, etc.)  What about for PowerPC machines, like old Macs, the Xbox360 or the PlayStation 3?  Well, the assembly code is very different in the gory details, but in the abstract it is absolutely identical:
Like x86, PowerPC machine code consists of bytes, with addresses, that represent assembly instructions and operands.  PowerPC machine code also spends most of its time manipulating values in registers.

Unlike x86, there are 32 PowerPC registers, but the registers have uninteresting names (they're called r0 through r31).  The names of the instructions are different; "li" in PowerPC (Load Immediate) is about like a "mov" in x86; "blr" (Branch to Link Register) serves the same purpose as "ret" in x86.

The return value register (MIPS equivalent of eax) is "$2".  To return from a function, jump to the link register $31.  One instruction after a branch always executes, even if the branch is taken; this is the "branch delay slot".

MIPS is a 4-byte per instruction RISC machine almost identical to PowerPC.


It's informative to look at the disassembly of this code on several CPUs:

On x86, there's a one-byte load prefix, followed by the 4-byte little-endian constant:
On PowerPC, because instructions are just 32 bits, you've got to split the 4-byte constant across two instructions, "load immediate shifted" the high 16 bits, then "or immediate" pastes in the low 16 bits.  PowerPC is big-endian.
On MIPS, you also have the low half/high half split.  MIPS has a "branch delay slot" after every branch, which always gets executed even if the branch is taken:
On SPARC, you also have a branch delay, and the constant is split up across instructions.  But it's split oddly--first you get the high 22 bits with "sethi", and then the low 10 bits:
On DEC Alpha, the only big surprise is that the machine code is little-endian.  "lda" actually adds, not OR's, the sign-extended "0xffffbeef" constant to "0xdeae0000", so the sign-extension combines with the high bits to give "0xdeadbeef" in register v0 on return.
Overall, you can see that all these RISC machines use four bytes per instruction.  That extra space actually adds up, as we'll see next.


One way to compare instruction sets is to compile the same program for several different CPUs.  Here are some executable sizes from the various ports of NetBSD, to DEC alpha, AMD64 (x86-64), i386 (normal x86), and Mac PowerPC:
Plain x86 executables are reliably over 10% smaller than either 64-bit x86 or PowerPC; and over 30% smaller than DEC Alpha executables.  Likely, this depends on the compiler and runtime system somewhat.

Surprisingly, compressing these binaries does not eliminate x86's advantage here, though they do reduce it somewhat:

For maximum data compression, Huffman codes use short codes to represent common symbols, and longer codes for the more rarely encountered symbols.  Hence it's informative to look at the statistical breakdown of instructions used in large programs, such as the Linux C library on x86:


This makes a little more sense broken into categories:


So for this piece of code, the most numerically common instructions on x86 are actually just memory loads and stores (mov, push, or pop), followed by branches, and finally arithmetic--this low arithmetic density was a surprise to me!    You can get a little more detail by looking at what stuff occurs in each instruction:
x86 does a good job of optimizing access to the eax register--many instructions have special shorter eax-only versions.  But it should clearly be doing the same thing for ebp, and it doesn't have any special instructions for ebp-relative access.
So the "typical" x86 instruction would be an int-sized load or store between a register, often eax, and a memory location, often something on the stack referenced by ebp with an immediate-mode offset.  Something like 50% of instructions are indeed of this form!

Granted, this clearly depends a lot on the program you analyze, and the compiler used for that program.  It's also highly dependent on the number of registers in your architecture; x86 has very few registers, meaning many functions access stuff on the stack that should be in registers.  And of course this static count isn't the same as a dynamic runtime count, which is what really matters.   But this sort of counting is still useful in designing better instruction sets and faster hardware--the bottom line is that most of real code is just data shuffling, with a low fraction of actual arithmetic.